ESCAPADES - Travel in the Danube Delta

5 Reasons why you must visit Eastern Europe

A long weekend in the Balkans

Est Evasion opens its programs to Group Travels and MICE

ESCAPADES - Travel in the Danube Delta

A wonderful discovery, the Plitvice lakes in Croatia

Tips for a first family holiday in Romania

"Unlike the Western ones, the Eastern Europe countries have kept their folklores" 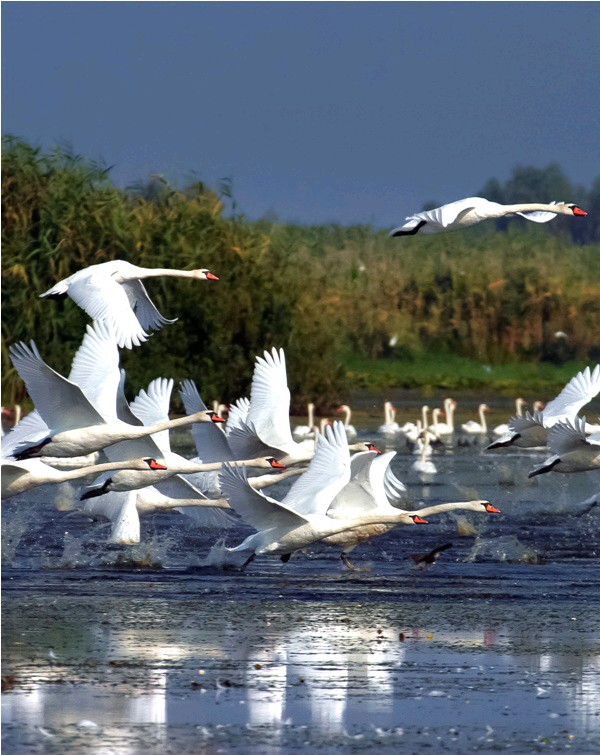 With its wild beaches and lush vegetation, the Dobrogea region is considered by specialists as the oldest territory in Romania today. It is hardly a surprise if I tell you that a trip on the Danube will take you to the ruins of some of the oldest sites left by the conquering nations.

The Dacian tombs and mammoth bones found here show that the area has been inhabited since prehistoric times.

"The nature lovers' paradise" could be the second name of the Danube Delta, this biosphere reserve inscribed on the UNESCO World Heritage List.

The second largest and best preserved delta in Europe, the Danube Delta extends along the three arms of the Danube: Chilia, Sulina and Sfântu Gheorghe.

Of course, if you are a fishing enthusiast (in specially designated areas, from June to December), then this is the place.

- Dobrogea region is famous for its many vineyards.

- In order to protect the Delta's natural wealth, only 8.7% of its surface can be visited.

Places to see and things to do

• Take a mud bath on the shore of Lake Techirghiol - an unconventional treatment but approved by our team (recommended time of year: June - October)

• Fantasio Theater: Bd. Ferdinand nr. 11, Constanta. Since you are in the area, you can not miss the most important city of the Black Sea coast: Constanta. A former Greek colony founded more than 2,500 years ago, Constanta is now home to the elegant Art Nouveau building of the Casino, built between the two world wars, and the romantic promenade from which we recommend watching the sunset.

• The Danube Delta is the ideal place for birdwatching as species from as far afield as Africa migrate in winter.

• If the season permits, go on a fishing trip. The fishermen start before sunrise, but again, the atmosphere on the channels deserves to get up at dawn.

• Murighiol is the furthest place but can be reached by car. From there, the ferry and the boats are the only means of transport possible to get there.

• The beaches here are much less populated than the beaches on the seashore, so much softer and more relaxing. St. George's Beach has the finest sand on the coast. The beach of Sulina is very wide, and the currents of cold water are combined with hot water. These areas, still unexploited, are a special attraction for lovers of the delta.

• In the Danube Delta, the most recommended is to stay in guest houses. Immersion is highly recommended by our services to live with locals, share beautiful moments around the fruits of fishing. You will have the opportunity to live like fishermen and villagers, admire the traditional architecture of this region, observe their customs and listen to their stories and there are many. You must absolutely taste the traditional fish soup or other culinary specialties!

Rediscover the taste of simple life in the countryside

Perhaps the best starting point in your exploration of Romania is the campaign where time seems to have stopped. When traveling through the Romanian lands, you will discover the sense of the incredible welcome of the inhabitants and their great generosity.

The lifestyle of Romanian peasants does not seem to be affected by time. Immerse yourself in the contemplation of these places and discover their traditions. The change of scenery is total.

In Romanian villages, you will participate in rituals that are a hundred years old. By detaching yourself from everyday life, you will get closer to the timelessness of simple values, and you will experience a true renaissance.

Because Romanian peasants always have a very close relationship with the land, their lifestyle is always that of their grandparents and their ancestors. The values ??that govern their lives are always intact: respect for the land, the community and God, the commemoration of those who have left, the faith in traditions and, consequently, in the future, and the transmission of all these values.

Ghindaresti is a village located on the banks of the Danube River and home to one of the most important communities of Russian Lipovans in Romania, where you will find this spiritual and cultural vigor that gradually disappears with modern life and its infernal rhythm.

Here, life flows like the Danube, slowly. The fishermen, those who stayed, cross it in their black boats. In the streets, we hear old Russian songs, sung with passion on the harmonica (harmosca) chords of the village musicians. A woman prepares meals for the family: the same day caught fresh fish brine, tarama, garlic sauce and "vareniki" dessert. In summer, children are most often found at Peasocik, a sandy beach on the Danube, or Mileaki, a wild, green island in the middle of the river. The local church watches over them, a valuable monument to the inhabitants of Ghindaresti, who defines them as Lipovan Russians or Russian starovers - an ancient Christian Orthodox rite.

The Russian ancestors who founded the colony settled here in 1800, after fleeing Russia because of religious persecutions, struggling to keep their traditions and religion alive. An example of courage, power and stability, Ghindaresti is still inhabited by century-old precepts, aware of their heritage as a precious gift to keep. Like Mileaki, the island in the middle of the Danube, Ghindaresti is also an island in its own way, in the ethnic landscape of Dobrogea ... all you have to do is climb a lotka (boat) and paddle a little to get there.

Tsar Peter II, following a visit through the West, returned home in the late sixteenth century, bringing with him cigarettes, razor blades and potatoes, things he did not find in his country. When he returned, he tried to force his subjects to shave their beards and change their kaftans (coats) to enter the European world. For those who did not want to submit to the royal rules, they were simply tortured. Many refused to discover their faces and fled to Romania, setting up a small colony near a young forest. This is the legend by which the village of Ghind?re?ti was born, which in literal translation means "New Village"

The first official visit regarding the Lipovene Russians of Ghind?re?ti appears in an official document published in Wallachia in 1837.

In Ghind?re?ti you can escape the hustle and bustle of the modern world, find yourself with ease and go back in time. I recommend it to those who need to escape stress, to those who are tired of living in the hubbub of others and for those seeking peace.

Here in the community of Ghind?re?ti, the Lipovan Russians form the majority of the population and today, as before, represent a strong community struggling to preserve its values, its customs because conscious of its heritage.

The great Nicolae Iorga, historian and Prime Minister of Romania, affectionately describes the Russian Lipovene communities in Romania: "clean houses, with large windows, carefully washed, courtyards full of all kinds of planks or other tools. Wild dogs bark in closed courtyards. (...) They speak Russian slowly, slowly. (...) These are our Lipovenes, the Starovers, the orthodox of the old faith. (...) To read is the norm of their life. Nowhere is the book more cherished than here. Every old massive volume contains the eternal truth with which contact must be maintained without ceasing. And the book keeps souls sweet and good. "

This escapade is written to you by the agency EST EVASION in collaboration with ANTREPRENORESTI - adopts a village (http://antreprenoresti.ro/)