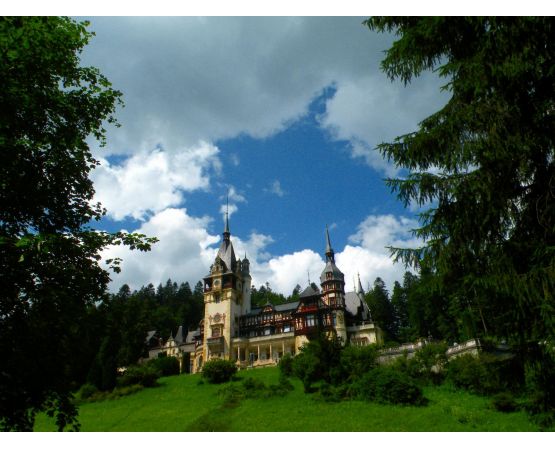 Cultural tour in Romania, a wonderful crossing of 4 "countries" into one, Wallachia, Transylvania, Bucovina and Dobrogea. A blend of modernity, history and nature, starting in Bucharest in Wallachia, a cosmopolitan city but with a tumultuous history that left many traces, passing through visits to castles, fortresses and fortified churches, medieval towns and villages in Transylvania, arriving at the top of the Carpathian Mountains and descending to discover Unesco heritage monasteries, artisanal pottery, sumptuous sculptures in Bucovina and end by boat trips on the Danube Delta, the second largest in Europe after the Delta Of Volga, house for 300 species of birds and 1200 varieties of plants.

Valid from April to Septembre.
.

3 *** hotel, traditional houses and stay with the locals
Ask for a quote 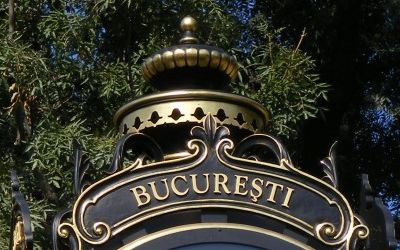 Arrival in Bucharest. The capital of Romania is a cosmopolitan city, active, with an unique charm. Mentioned first in 1459 as the residence of King Vlad Tepes - now known as Vlad the Impaler - the city experienced a tumultuous history that left traces.

Accommodation in a 3-star hotel in the city center. 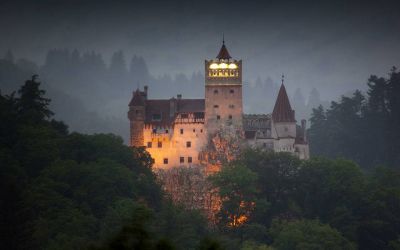 In the morning, transfer via the Prahova valley to the Sinaia station, where Peles, the Royal Castle of Romania, is located.

Walk around in the station and continue to the village of Bran, where you will visit the castle of Bran, a beautiful fortress of the 14th century, one of the most famous and also the most expensive castles in the world thanks to its reputation to the unmistakable Dracula. The castle was restored by the royal family of Romania and it is an imposing building that keeps the passage between the two Romanian provinces: Transylvania and Wallachia.

In the evening you arrive in Brasov - one of the most important cities of Transylvania.

Accomodation in a 3 * hotel in the city center. 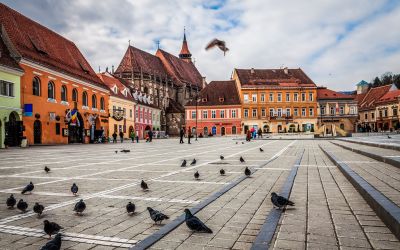 Day 3 - Brasov and the fortified churches

In the morning you will discover the city of Brasov. Surrounded by the wooded slopes of the Carpathians, the town was built from the 13th century by the German settlers known as "knows" of Sachsen - Saxons. Guests from Transylvania by the Hungarian king, the Germans - mostly from the region of Luxembourg, the Moselle valley and Franconia - populated from the 11th century the entire southern part of this province, except the mountains, dominated Traditionally by the Latin-speakers called at that time the Vlachs or vlachi, later the Romanians. The Germans left after 800 years, following the invasion of the Red Army, the malpractices of the Communist period and finally the freedom of movement gained by the 1989 Revolution. Only a minority of 0.6% of the population of Romania. On the other hand, what remains is an enormous heritage consisting of hundreds of medieval villages, cities such as Brasov, Sibiu, Sighisoara and, above all, fortified churches endowed with ramparts following the great Mongol invasion of Genghis Khan in Europe in 1241. Today, Brasov is considered the center of alpine tourism in Romania. The old town houses a labyrinth of cobbled streets, medieval buildings, baroque and neoclassical times, ramparts and guard towers, pedestrian streets. Drive to Sambata de Sus Monastery - located at the foothills of the Fagaras Mountains - the highest mountains in Romania. The monastery exists since 17th century and is built in Brancovenesc style - the original architectural style of Romania.Visite and continuing towards Sibiu, which in 2007 was the Cultural Capital of Europe. With a vast medieval center that has been well restored in recent years, and a vibrant cultural life, Sibiu is home to the second museum, Brukenthal Museum, which is open all over the world. Sibiu is the capital of the German minority (Saxon) in Romania.

In the evening - 30 minutes by car to reach the village of Sibiel (Little Sibiu), which is part of an ethnographic area that has always been Romanian, and where the main occupation of peasant women has always been sheep farming . The cheeses from here are still known throughout the country as among the best. Installation in peasant houses and traditional diner. 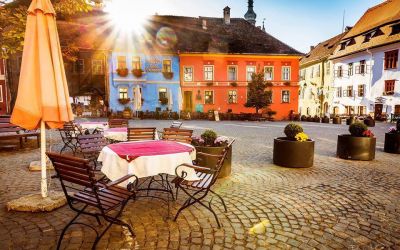 In the morning you take the road to Sighisoara, classified Unesco city which remains one of the most authentic medieval cities of Europe. From here you go on foot to make a tour of the fortress following the ancient walls and the bastions. Sighisoara is also the city where Vlad Tepes (Dracula) was born almost 600 years ago.

In the afternoon you arrive in the village of Viscri (Deutschweiskirch), originally a Saxon village, a UNESCO World Heritage Site, which is undergoing an intense transformation. 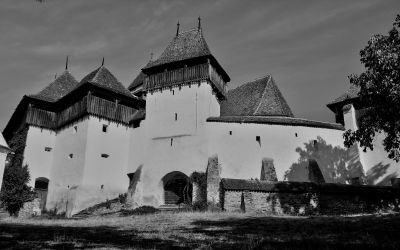 A day devoted to relaxation in the calm atmosphere of this village - representative for the architecture, landscape and especially the destiny of the Saxons of Central Transylvania. There are many things to see: the beauty of the surrounding landscape - the Natura 2000 site, the farrier, the coal factory, the fortified church, and all this, using a means of transport very common here - a horse cart.
Dinner and accommodation in Viscri. 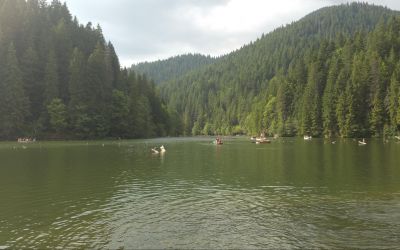 In the morning destination to the village of Viscri, in the Szekler region, a minority of people known for their Hungarian language and specific architecture.

On the road you will visit a peasant workshop in the village of Corund and continue to Lacu Rosu (red lake) and Bicaz Gorge - one of the cradles of climbing in Romania. Its limestone cliffs are vertiginous and reach more than 350 m.

Arrivel in the region of Bucovina. There is here a monastic archipelago unique in Europe: monasteries of the late Middle Ages, with extremely well preserved exterior frescoes that combine the local traditions of wooden houses and frameworks, with Byzantine painting and Gothic architecture.

In the evening you arrive in the village of Sucevita or you have as guests the Cazac family and their neighbors. Accommodation in rural houses of Bucovina. 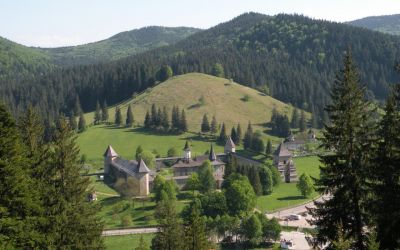 In the morning discover of the monastery of Sucevita, built and painted towards the end of the 16th century, whose dominant colors are red and green. Then you climb the Ciumarna pass and arrive in the valley of Moldovita. Visit of the monastery with the exterior frescoes of Moldovita and the workshop of the painted eggs of Glicheria Hretiuc. It is a tradition of the Hutsuli indigenous peoples, who are quite enigmatic, who speak a Romanian-Slavic language, and who maintain a very special connection with the omnipresent pine forests of Bukovina.

Destination to the village of Marginea, a craft production center of black pottery. The tradition continues here since the Neolithic. You will have the chance to see the master potters at work.

In the evening return to Sucevita, where the guests await you with a good evening meal. Accommodation. 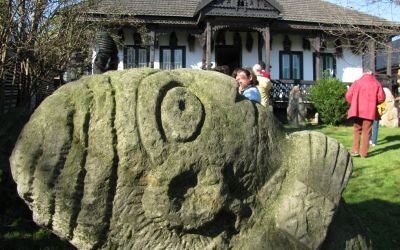 Destination to the village of Tarpesti. This cultural place is an opportunity to visit the vast collection of traditional objects belonging to Mr. Popa. You will discover here sumptuous sculptures as well as a large collection of ceremonial masks made by the artist.

Then the road continues towards the south of the country and in the evening you arrive at Galati, the port on the Danube.

Accommodation in a 3* guest house. 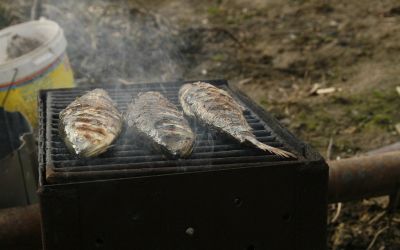 Breakfast and transfer to Tulcea, the gateway to the Danube Delta.

The Danube Delta is the second biggest Delta in Europe after the Volga Delta. In its numerous lakes and marshes, it contains over 1,200 varieties of plants, 300 species of birds and 45 species of freshwater fish.

The afternoon destination to a fishing village. Discovery of the village, dinner and accommodation in a guest house. 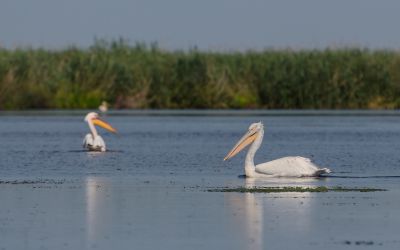 The whole day is dedicated to boat trips on the small canals of the Delta. It is also possible to use traditional rowing boats.

Lunch in the form of a picnic.

The afternoon return to the village for dinner and lodging. 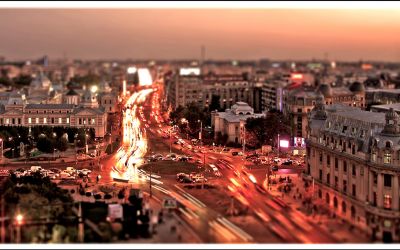 In the morning transfer by boat to Tulcea. In the afternoon return to Bucharest. 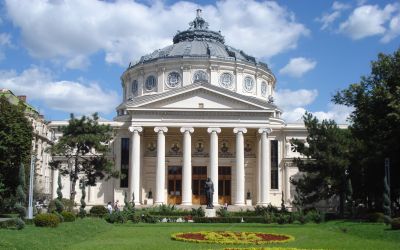 End of stay in Bucharest.

Possibility to customize this offer from 7 participants! Please Contact us.

- the flight (ask for a quote)

- Photo or video taxes during the visits of the monuments